Electron transfer reactions among colored cytochromes in intact bacterial cells were monitored using an integrating cavity absorption meter that permitted the acquisition of accurate absorbance data in suspensions of cells that scatter light. The aerobic iron respiratory chain of Leptospirillum ferrooxidans was dominated by the redox status of an abundant cellular cytochrome that had an absorbance peak at 579 nm in the reduced state. Intracellular cytochrome 579 was reduced within the time that it took to mix a suspension of the bacteria with soluble ferrous iron at pH 1.7. Steady state turnover experiments were conducted where the initial concentrations of ferrous iron were less than or equal to that of the oxygen concentration. Under these conditions, the initial absorbance spectrum of the bacterium observed under air-oxidized conditions was always regenerated from that of the bacterium observed in the presence of Fe(II). The kinetics of aerobic respiration on soluble iron by intact L. ferrooxidans conformed to the Michaelis–Menten formalism, where the reduced intracellular cytochrome 579 represented the Michaelis complex whose subsequent oxidation appeared to be the rate-limiting step in the overall aerobic respiratory process. The velocity of formation of ferric iron at any time point was directly proportional to the concentration of the reduced cytochrome 579. Further, the integral over time of the concentration of the reduced cytochrome was directly proportional to the total concentration of ferrous iron in each reaction mixture. These kinetic data obtained using whole cells were consistent with the hypothesis that reduced cytochrome 579 is an obligatory steady state intermediate in the iron respiratory chain of this bacterium. The capability of conducting visible spectroscopy in suspensions of intact cells comprises a powerful post-reductionist means to study cellular respiration in situ under physiological conditions for the organism.

Certain chemolithotrophic bacteria inhabit ore-bearing geological formations exposed to the atmosphere and obtain all of their energy for growth from the oxidation and dissolution of minerals within the ore. Energy is derived from oxidative phosphorylation coupled to respiratory electron transfer. The ability to respire aerobically on soluble ferrous ions under strongly acidic conditions is currently known to be expressed by at least 34 species in 14 genera distributed throughout the Gram-negative (Markosyan, 1972; Huber and Stetter, 1989; Kelly and Wood, 2000; Hallberg et al., 2010), Gram-positive (Clark and Norris, 1996; Norris et al., 1996; Johnson et al., 2008, 2009; Guo et al., 2009; Jiang et al., 2009), and Archaea bacteria (Segerer et al., 1986; Huber et al., 1989; Huber and Stetter, 1991; Karavaiko et al., 1994; Golyshina et al., 2000, 2009). Given the genetic diversity within this collection of phenotypically related bacteria, it would not be surprising to learn that phylogenetically distinct groups of bacteria express different electron transfer biomolecules and pathways to accomplish aerobic respiration on soluble iron.

This paper introduces a new means to study respiratory electron transfer reactions in situ in intact bacteria under physiological conditions. The premise is that accurate UV-visible spectroscopy of electron transfer reactions among colored cytochromes can be conducted in highly turbid suspensions if the live bacteria are irradiated in an isotropic homogeneous field of incident measuring light. Under those conditions, the absorbed radiant power is independent of scattering effects (Elterman, 1970; Fry et al., 1992; Javorfi et al., 2006; Hodgkinson et al., 2009). We conducted equilibrium and kinetic studies on the Fe(II)-dependent reduction and O2-dependent oxidation of cytochromes in intact Leptospirillum ferrooxidans at pH 1.7. We used a commercial integrating cavity absorption meter (ICAM) where the cuvette comprised a reflecting cavity completely filled with the absorbing suspension. L. ferrooxidans was selected because it is only known to respire on one substrate, reduced iron (Harrison, 1984). We observed that a cytochrome with a reduced spectral peak at 579 nm is an obligatory intermediate in the aerobic iron respiratory chain of L. ferrooxidans.

Leptospirillum ferrooxidans DSMZ 2705 was cultured autotrophically on soluble ferrous ions at 30°C in the medium described elsewhere (Tuovinen and Kelly, 1973), adjusted to pH 1.5 and amended with 44 g/l of FeSO4·7H2O. Cells grown to stationary phase were harvested by centrifugation, washed three times with 0.02 M H2SO4, pH 1.7, and resuspended in sufficient 0.02 M H2SO4 to achieve a stock suspension of 1.5 × 1010 cells/ml. The stock suspension was stored at 4°C for up to 2 weeks while spectroscopic experiments were conducted on aliquots of the cells. Previous stock suspensions of this organism have been stored in dilute sulfuric acid at 4°C for over 6 weeks before changes in the bacterium’s energy metabolism could be detected.

Absolute numbers of L. ferrooxidans cells were determined by electrical impedance measurements in a Multisizer 4 particle counter (Beckman Coulter, Inc., Brea, CA, USA) fitted with a 30-μm aperture. The instrument was programmed to siphon 50 μl of sample that contained Isoton II as the electrolyte. The current applied across the aperture was 600 μA. Voltage pulses attendant with impedance changes as particles passed through the aperture were monitored with an instrument gain of four.

Relative numbers of L. ferrooxidans cells were determined by photon correlation scattering spectroscopy with a DelsaNano C particle size analyzer, also from Beckman Coulter, Inc. Cell densities were adjusted to 8.3 × 106 cells/ml in 0.02 M sulfuric acid to give an attenuator obscuration of 47%. Determination of the relative numbers of light scattering species as a function of particle diameter was accomplished by the time domain method with operating and analysis software provided by Beckman Coulter, Inc.

Absorbance measurements on intact cells in suspension were conducted in an Olis CLARiTY 1000 A spectrophotometer (On Line Instrument Systems, Inc., Bogart, GA, USA) that employed a novel ICAM. In a typical experiment, identical 4.2 ml solutions that contained ferrous sulfate in 0.02 M sulfuric acid, pH 1.7, were added to both the sample and reference observation cavities of the spectrophotometer. After recording a stable baseline from 350 to 650 nm, 140 μl were withdrawn from the sample cavity and replaced with 140 μl of the stock cell suspension of L. ferrooxidans. Apparent absorbance spectra (typically 6.2 s−1) were then collected until any visible absorbance changes had ceased. Raw apparent absorbance values were converted to absorbance values per cm using Fry’s method (Fry et al., 2010) as described in the text.

The principal features of the novel CLARiTY spectrophotometer used to conduct absorbance measurements in turbid solutions are included in the schematic diagram shown in Figure 1. The sample and reference observation cells of this dual beam spectrophotometer were each comprised of a 4.2-ml spherical quartz cuvette fused with a 6-mm ID quartz tube. Each quartz chamber was surrounded by a tightly packed proprietary white powder that served to maximize diffuse reflectance of light on the exterior walls of the spherical flask. The apertures in the reflecting sphere through which the measuring light entered and the transmitted/scattered light exited to the photomultiplier tube were positioned at a 90° angle such that the light had to undergo many reflections and cell transversals before it was quantified using the photomultiplier tube. A white Teflon plug with a 6-mm OD was inserted into the quartz tube to minimize the loss of light out of the neck. A 1.0-cm white stir bar was included in the sample chamber to facilitate sample mixing and suspension of any particulate matter. 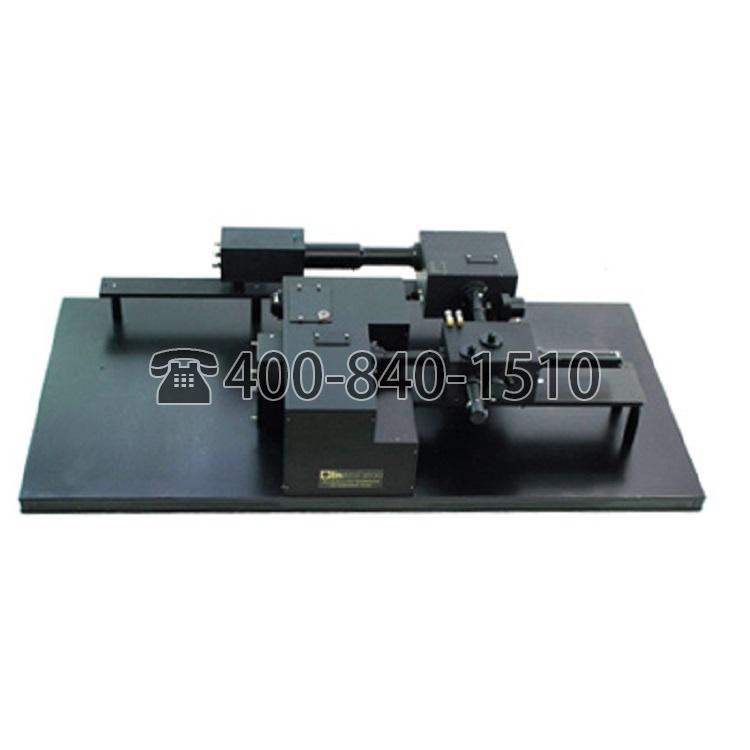